Mom had a crush on Ben Franklin...but according to who's calendar?

Calendars in any shape or form is the topic Victoria gives us today at dversepoets.com  I had a story already written...could be considered poetry I suppose.  I apologize ahead of time if I breaks any rules..


Mid 18th century flying kites and statesmen wearing tall black hats meet the 20th century -   post two world wars and more.  The carriage drawn by high stepping horses stopped in front of her, splattering mud on her newly made long dress. Her thoughts were of their much anticipated conversation; she had invited him to dine at 8:00.

She believed they met in previous lives, reincarnated time and again.  The year was 1789 - Jane Austen had just published, first immigrants passed through Ellis Island's sieve.  It was still the beginning of our experiment called Democracy.  Women's lib and civil rights had not yet emerged. After our independence was fought for and won, a congregation of intriguing, inspired souls sought to write a constitution based on high moral ground founded on grace.   Paul Revere was now an older man, a decade since George III impressed his young men to serve.   Ben had a keen sense of business, adventure, humor, and theory.  He ducked down and stepped out from the coach right in front of her.

She had held him on a pedestal above all others - now,  the opportunity to pick his brain.  His stout torso belied how handsome he was as he then kissed her extended hand. Suddenly, the phases of the moon sped before her, streets of Paris and London came alive as she almost fainted. The moment confirmed what she believed to be true, it wasn't just the beginning of their friendship.  An aura of oneness permeated them at that moment...she  thought they had both lived during the early Crusades, were in South America when the Incas fought the Spanish; something connected their interchangeable parallel lives.  She was fond of him; they most probably had been lovers at one time.  She was going to dine with Benjamin Franklin. They shared the same sense of order of things, desire for equality, ideas on government and an unquenched thirst for knowledge.  Yet she did not want to give him the 3rd degree, but would be a patient listener. And so, they set out to solve the world's problems together over wine and food.

Beginning with the hashing over of details about how peacefully the snow falls in Washington D. C., and how to catch sun light in prisms through the small window in the alcove, experimenting with alignment of the planets so she could better understand how the they affect all, to philosophy and religion.  In the light of the Tiffany lamp, he found her attractive, was pleased to exchange intuitive ideas with someone whose curiosity matched his.  Tickled she was when he fed her stories of society's plights; for example, how tattoos above the knee spoke of sensuality. Progressing into the night, they drank sherry...he loved impromptu speeches, made contemporary speaking an art, was the original "toastmaster" and spoke of his inventions.  Abolitionist, author, artist, ambassador, with his quick wit and acumen he could make her chortle at the drop of a hat.

They were in awe of and mutually adored and respected each other.  As highly educated as he was, she was grateful to bring him up to speed on anything current she could.  She knew he could not have conceived of the magic of "windows" and PC's or i-phones or mattresses that remember one's form, but he would realize the importance of technological advances better than anyone else of that time. Time sped by as they talked of inventions, tolerance, economies, the many troubles of the world...politically, the time was ripe for change.  They agreed on a progressive approach.

Flushed with new promise of further communication between them, she bid him good night when the carriage returned at the stroke of midnight.   He waved,  traveling out of sight from her on the same wet cobblestone street where John Adams used to walk. She pulled out her handkerchief. Their relationship was eternal and they would meet again before the next millennium, in a world very changed, due to hundreds of years of unfathomable influences.  The tenuous balance of power teetered perilously many time over the years; taunt tightropes had to be walked by our leaders to preserve peace and justice.

Their business had just begun, she mused, as she held tightly onto her black floral hat being blown about by the night's bracing north wind.  Lovely was the brief tete' a tete' with her longtime friend...she could think of no other person she would have cared to have the pleasure of dining with, and no other time on the calendar to visit.  My mother passed in 1996.

Email ThisBlogThis!Share to TwitterShare to FacebookShare to Pinterest
Labels: Benjamin Franklin, calendar, dining with a famous person, dinner and politics, time in history

My doctor, my new doctor, bless her soul
humbled was I at the waiting room door
New patient meets seasoned doctor, her role -
pick up where the other left off before

How does one cram 66 years into
one hour's  exam...hope she won't retire soon.
The lump in my throat grew as loosened my shoe,
causing the slip on wet maple leaves strewn

Elbow and knees met the pebbled pavement;
sometimes life seems like being in a cartoon
I chose her to be my new confidante
She will soon learn that I'm a crazy loon


Doctor, oh, doctor,  my  story is long -
connections I have but no real roots yet
Tears welled up when I should have sung a song,
some saw my fall but right on by they sped

Disheveled with minor skin scrapes, I knew
a wrench had been cast into the feeling
of honeymoon new;  always a good clue,
my smugness brought to an abrupt reeling

My doctor, wise doctor, listened and poked
"New to the island, I said"... understood.
Noticing my new woolen scarf was soaked,
she replied, "your blood pressure is quite good!"

I realized that, after  a big move,
things have a way of catching up with you
Certain matters resurface I'm  behooved
to believe, to remind us not all's new

"Come back in a month and we'll do blood work..
eat all your green veggies, buy better shoes"
she said,  "follow the path that by some quirk,
brought you thus far.  Keep the feet warm with socks, too."

Tony at  dversepoets.com asks us to write an Ode..Neruda style...well his are sensual and beautiful and I am not in the frame of mind to attempt a similar one...therefore, something that happened the other day is what I wrote about..
Posted by Kathy Reed at 10:35 PM 37 comments:

Love is not enough...American sentences..

Today at dversepoets.com Gay tells us about the 17 syllable sentence Allen Ginsberg invented,  a form of beat poetry...thought I'd give it a try with these sentences with images:

Babes in the woods, never off her mind, her first love and first born, princes

A smorgasbord of art fills our plates before us, nourishing our souls 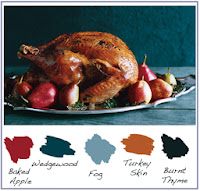 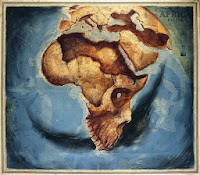 Watercolors on the stairs....

Claudia invites us to write color poems at dversepoets.com 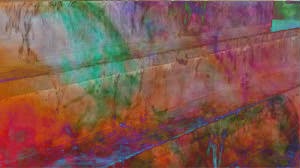 II.
Smell of sandy, burly grey driftwood fires,
kindled by fiery red confidence
and buried pristine blue self reassurance
clears the mind of fuzzy slate grey doubt
Watercolors flow down the stairs, out,
into a transparent world of unseen
angry ultra-violet despair, where
great pains once were taken to save
lighthearted spirits stolen, that even brittle milky quartz
should not weaken -now replaced with champagne
pink martini dreams


III.
Ugly dark puce guilt clogged her arteries
Unsought, deep coffee noir' wells of loss
crept into her misty hazel eyes
Although the diagnosis was acute
and blizzard blue storms freeze minds
and missing hearts unable to thaw or process,
the best and worst thing you can do -
I think, is to don your curry yellow leggings,
Prussian Blue jacquard tunic,
ruby red jester hat and tufted gold toe shoes..
...and stand outside in plain sight !!!