Celebrated daily discussions held at the Algonquin Hotel in Manhattan between 1919 and 1930 - including literaries Edna Ferber, Dorothy Parker, Charles Mac Aurthur, Harpo Marx and many others.. 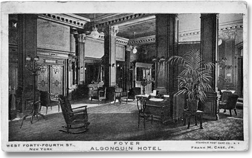 Library of minds
gathered at the round table
Cunning lunch affairs


Imagine there were
profound sentiments expressed
some borne of great pain


One ought not complain
Many lose extremities
or are disabled


But my new pet peeves
are quite exasperating;
Splints, casts and air boot


What an annoyance
so awkward and cumbersome
Dems my lucky breaks

You may not be old enough to remember the original song "Dem Bones..", written
in 1945 by James Waldon Johnson and then copied by many an artist since.  However many are familiar with the popular ditty in learning how 'them bones' are connected. Since I have been dealing with a few bone issues recently, I thought I would elaborate a little bit...

The biblical source for this phrase comes from Ezekiel's vision of the Valley of Dry Bones, with history
all its own; it includes three other pious men, Shadrack, Meeshack, and Abednigo,  for whom another spiritual song was written.

I loved studying physiology!  Recently though, I've learned first hand more about the human
skeleton and how it is repaired.  The ankle bone is connected to the foot bone - the foot bone is where bone spurs can grow on the heel and eventually tear the Achilles tendon, causing great pain!  For this to (heal), short distances with little or no pain at all.    Amazing!! This also gives one the opportunity to catch up on one's reading as one is limited by
not being able to drive while wearing the boot.

The arm bones (ulna and radius)
are connected to the phalanges (this I knew) and the thumb metacarpal joint is connected to the trapezium.  When degenerative arthritis destroys the base thumb joint and one then falls on it, further damaging it, an orthopedic doctor must perform an angioplasty to re-establish the joint.  Without going into  more detail, assorted tools are used for this, including pins and a drill.  Amazingly, again, the continuous aching pain of arthritis of the thumb is gone..relief!!!  There is only the pain of the incision.  Now again, one needs time to elevate and rest the entire arm in a splint for 4 weeks and a cast for 5 more weeks.  Again, plenty
of  time to find other things to do like write, read, and paint using the good hand.  Of course,
there are months of therapy ahead. 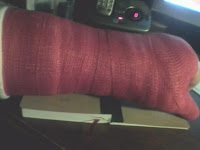 In 2004 I fell, in the dark, stepping where there was no step...as you know the arm bones, the ulna and radius, are connected by the elbow joint to the humerus 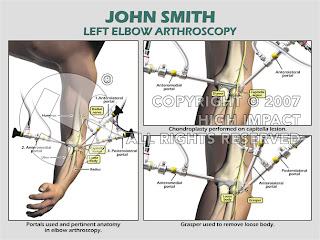 Of course, pain is managed with pills the first 3-4 days post surgery, although you are expected to
be able to withstand up to a level 7-8 on a 1-10 pain scale at times.  It is most tolerable at the 5-6 range,
as anyone who has had any kind of surgery can attest to. These procedures are innovative and incredibly proven to help many an athlete or person in need of joint replacement. Tools of the trade include hammers and knives, saws, rods and bolts and pins.  Amazingly, hips, knees, backbones,  wrists and ankles can be made to work again quite easily these days.  Miraculously, one can return to the lifestyle one was living before the injuries or incidents occurred, except for heavy duty work.  I have every confidence in the
world that one can survive even horrible accidents by turning one self over
to the care of the bone doctors and their nursing staff.

Bones can be lovely, aged and brittle, can hide
secret evidence of homicidal nature, or bear genetic clues, (CSI). Medicine has become bionic in nature.
The medical profession has come a long way in all fields, it is true. I read fewer books and watched more movies during these times -
Unless one is isolated, no longer does one have to suffer the excruciating pain of having
a leg amputated as a result of an infected injury or snakebite with only a jug of whisky to anaesthetise the
patient, an unsanitary bed, and whoever might be at hand to perform the deed - with the proverbial
soap and water boiled on the stove, if lucky!   Perhaps you saw
Robert Duvall perform the same scene in the movie " Lonesome Dove"?! 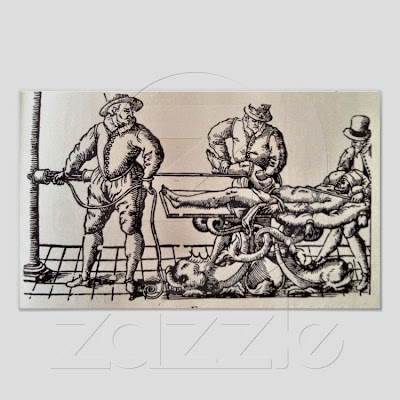 Photo Art Friday
I had put this together not realizing it could be used for today's entry, so it lacks having the poem or part of it in the actual photo; instead there you will find faint words from one of Bonnie's textures...I could have altered it more, but thought this would suffice for now;) 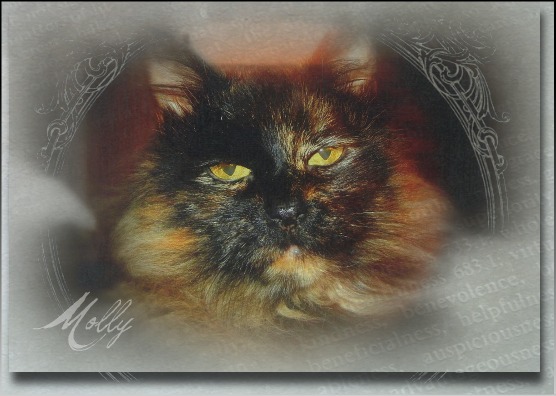 Molly was fearful when I adopted her
I wonder what was the cause of her trauma
At first she'd hide in the fireplace,
her coat, soot, with highlights of gold and auburn
She resembled Lauren Bacall
And had the tortie attitude to match
We bonded gradually as I brushed her;
declawed paws kneaded me but didn't scratch.


We  were each other's gifts for awhile
she didn't go outside except to sun bathe
I'll never know just what happened;
would she return from her adventure unscathed?
I called for her and searched online, everywhere
My fault the door that day was ajar
After days away in the cold,
had fright of crashing branches sent her far?


Weeks later she was found
just four doors down,  unable to walk
She had suffered a stroke the veterinarian said
and  was deliriously in shock
Her instinct to land on both feet was gone
I wanted to take her home to heal
What a blessing to see each other again
Her grateful green eyes didn't see me,
but she knew I was there,
and purred tranquilly as I held her head
in  prayer

Photo Art Friday
Posted by Kathy Reed at 9:18 AM 22 comments: 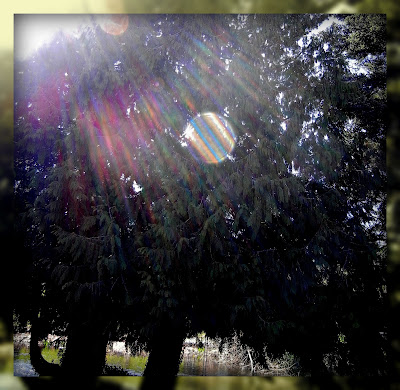 Winter passed just days ago and I find myself with fresh views from my bedroom which
faces Clover Creek.  Before, an ice storm snapped tree branches, my sweet cat, Molly, could not
find her way back home to me, and then the loss of a dear neighbor and friend.  The visages of age are made apparent with a red fiberglass cast on my left arm (more about that in  my next post). How did 65 years go by so quickly?  March 31, 1947.  Like thousands of feet of mini dreams spliced together on a flickering
reel of old film, it continues like the slow locomotive flow of the creek.


I pretend I'm sitting on a cloud, like a child imagining, and ask:  Were there still fairies that
disappear in a half wink among the trees?  Will there be bands of gold when I reach the sea?  And will the heirloom seeds I planted yesterday grow?  How to control the fluttering at my collarbone as I see moonbeams reflect on the creek, so different from the phosphorescent  light tripping at night.
Sought after dreams are still dreams.


Create a free slideshow with Picnik!

But I take heed of the trees' whispers, as more color spills from the garden by day, new lilacs
and honeysuckle budding, waiting for monarchs and hummingbirds to arrive.  The fluffy yolk of the sun  forms a bridge to my front door where I will hang a springtime wreath.  Quilted jelly jars on the shelf, waiting to be filled with blueberry jam.  I hope the hollyhocks bloom a regal red.  Spring breathes eternally and faith is restored with buttercream frosting on my cake.  Family and friends mark the date with cards and forever smiles.  As the creek flows into a lake, it becomes a river which flows to the sea.  The mosaiced ocean
calls for me.  A misty morning on the boardwalk, pink clouds shaped like ponies on the horizon, gulls
write an opus in the breeze. The eye follows till it reaches the blue midnight air. A new- found,
heightened state of joy and peace is at the heart of me. 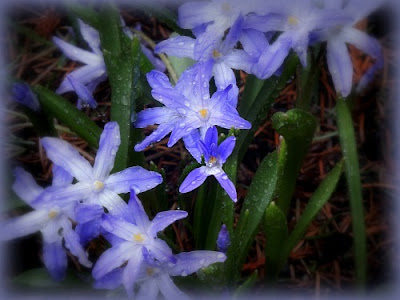 Outside my door
Posted by Kathy Reed at 9:15 AM 16 comments: