For as long as I can  remember,
they comforted me,
kept me safe, more than toasty warm at night,
reminding me it was fall -
always ready for an early bedtime.
As birthdays passed, I outgrew them quickly.
Mine had cuffs, pockets,
and presented themselves in all colors plaid.

Made from hand picked cotton
grown under a scorching sun,
washed hundreds of times,
flannel summer sheets also kept my body cool.
Napped on one side,the soft fabric,
associated with good horse-sense,
comfortableness, applesauce,
and bologna sandwiches for lunch,
swaddled me.
Snuggling in them with a teddy bear,
I dreamed of sailing boats, pussycats,
and stars in relation to Mars.
When wearing them,
it seemed all was right
in the wide, wide world,
as if it were made of sweet buttery
saltwater taffy.

All that, and I still wondered
about kids who wore nothing to bed
but skivies, walked all day on bare feet,
gunfire and bombs overhead
all through the night,
little food to eat.
I must have led a protected life,
growing up in middle America...
but I think I always knew
it was a perilous world,
not to be taken for granted;
I learned early each Christmas was precious -
and not just because
there was, under the tree,
another set of flannel pajamas,
or a long red plaid flannel nightie! 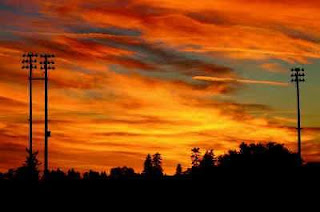 dversepoets.com
We are to use a form of the word "kick" in a 44 word Quadrille....

He is well known among islanders living along Whidbey's East Harbor Road in Freeland as Santa Claus. With his snowy white beard and hair, twinkling eyes, and build, he is a classic Santa.  One wonders if he were to put his finger aside his nose, it would  follow, "...and up the chimney, he rose"?!

Terry, a Teamster beer truck driver for 33 years,   worked for the original Olympia Brewery and quickly earned the nick-name Terry Tumwater. Judy, his wife,  retired as cook from the Clover Patch Cafe in Bayview.  More often than not, he can be seen riding his lawnmower across his expansive front yard or selling firewood he worked hard to chop from trees fallen on his ten acres. One may catch sight of him listening to a Mariners' game outside or with friends who drop by to discuss the news of the day or simply BS. Many a passer-by waves or honks as they cruise by their home.  It's not unusual to find a gathering around a bonfire where they listen to him and his friend, Caveman, play toe-tapping Bluegrass music, Terry on his old guitar and Caveman plucking his banjo.  His audience, of course, guffaws at his off-colored jokes with his contagious, deep, raucous laugh; they exchange fishing and drinking stories. This pastime is shared while consuming beer or whatever one might bring in a flask from home.

Lately, he has a new story to tell, a tale the 76-year-old man loves to repeat to anyone who cares to listen. His suspenders stretched to the max by his puffed out chest, he recalls with pride the unlikely event that took place last August when he was touched by a moment of fame.

First, to be clear, Terry had few toys as a child. He was one of five brothers, their father a big  Norwegian logger. He grew up fighting dirty with the local boys for fun.  Over the years, he has accumulated time-worn junk, miscellaneous tools of yesteryear, tractors, lawnmower parts, rusty trucks, beer signs, a few antiques.  He built several outbuildings from scratch...a lean-too, tool shed, an outhouse, a shack chock full of collections of old axes, more tools, a locally-carved bear, cast iron frying pans, oil lamps, calendars, an old percolator, and memorabilia from the "Good Old Days". That corner of his backyard is affectionally named "Terry Town".

The tool shed functions as a hideaway for solitude or conversation around a small, wood stove on chilly or rainy evenings. A light above the door guides the way.  In the darker months, I carry a lantern when walking to the secluded shack to light my way to and from my car.  Always, I am guided by the smell of smoke breathing out from the off-kilter chimney, and the radio I hear inside, tuned to the Oldies station, KIXI.

Terry never imagined in his wildest dreams what was about to unfold one weekend this last summer when he heard rap star Macklemore, who hails from Seattle, asked his videographer to tape a music video at just such a location on Whidbey Island. The videographer happens to be Terry's grandson, who recommended the place. For three days, Macklemore's crew of 60 set up camp in his backyard. Multiple vans and cars arrived full of equipment; a makeshift set resembling a festive campsite was erected against the 70's background designed for the rapper by his producer.  An old green upright piano was hauled in, an improvised stage, furniture, pillows, rugs, a dented, bohemian Airstream trailer, lights. Various action scenes were taped of Macklemore rapping.  One afternoon,  female rock star, Kesha, appeared. She and Macklemore created the four-minute video which later would be dubbed in with the music in a studio.  His new album of 16 songs, Gemini, to be released Sept. 22, 2017, includes the one filmed at Terry's called "Good Old Days".

Terry stayed out of the production, mainly watching, but helped moving pieces on the set in his unique backyard.  After work each day, food was brought in; extras and crew visited with Terry, became acquainted with Bluegrass as he entertained the crowd. He engaged them by teasing them, as a grandfather might his grandchildren.  As host to a very polite and gracious Macklemore, Terry became the center of attention, bathed in the spotlight of a different genre of music for a time.

The secret that Macklemore was shooting a video on the island did not get out until they had wrapped everything up and shipped out the equipment brought in. Otherwise, imagine the onslaught of young people who might have tried to get a glimpse of the star.

For the couple, Judy and Terry's lives are back to normal.  They always had a love-hate marriage, losing patience with one another at times. But two years ago, Judy had a very serious health scare. He nursed her back to health. Now that she is recovered, Terry says everything is back to normal. He knows she is well because, when he is a bit cantankerous,  she again calls him an asshole at least three times a day!! 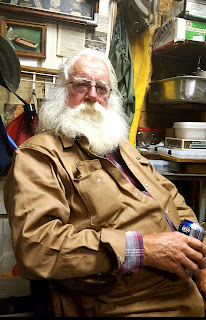 For both of them, it was an experience they will never forget, a time when strangers came and left their mark in the form of gentle friendships and shared good times. Macklemore promised to visit when he has a break from working and returns to the island where his mother lives in Langley.  After the video was released, the producer returned, deluged the couple with gifts.  Among them were beer, chocolates, Macklemore socks and scarves, lawn chairs and CD's. But the grand prize was a brand new guitar, signed by Macklemore himself.  Now that it has been tuned just right, according to his ear, you can find Terry still picking bluegrass on his new guitar. Now, however, there is the fond memory of his treasured brush with fame when they, generations apart, came together and made music. You might say these are the new "The Good Old Days".