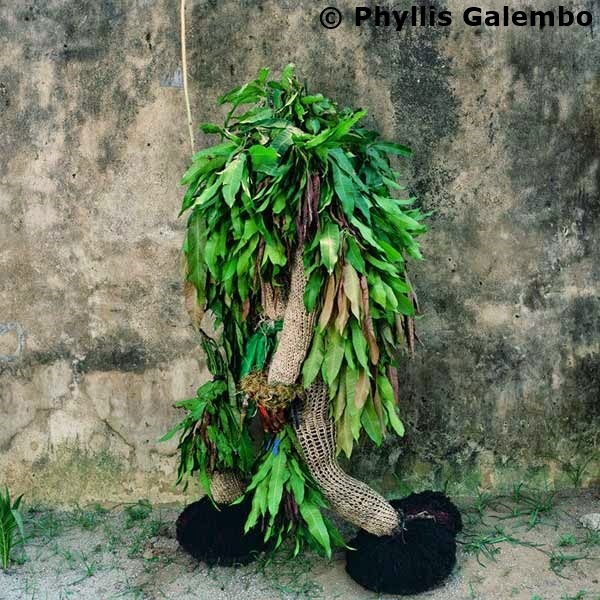 dversepoets.com we are introduced to the photo art of Phyllis Galembo;
we are to write a poem from one of her intriguing photos -

He had been the young king of hearts,
fondly thought of throughout the land;
he bestowed upon all he met fresh fruit tarts,
but perhaps he was dealt a bad hand
Men thought him the king of plenty
for his gold alone, he lived on an island
He seduced ladies with glasses of champagne
liked them to be at least the age of twenty,
but from sex with them he did abstain
for they were ooh so pretty and innocenti
Folks say he was pleasant, spoke gently;
though they did not know he was insane

All twas not for his own personal gain
but it didn't pay, for his crown was taken away
Outcast and alone,  he was driven to feign
There is safety in the trees they say
So he lived as a tree twixt and twain
Though he had one fourth wheel missing,
he was, for all he did, more valiant knight
First, he let all prisoners get away
and, as he was known for his kissing,
they grabbed him and locked him away
Soldiers put him in handcuffs tight;
his destiny became just an existing
Who can explain the turn of events-
he became the king of the asylum,
first using his natural talents to start
by earning degrees in the fine arts
Proud of his aboriginal descent,
he still was crazy, one hundred per cent

Email ThisBlogThis!Share to TwitterShare to FacebookShare to Pinterest
Labels: hero or not, Poem for Pamela G; king to pawper